The shift toward WYOD: Wearable devices entering the workplace 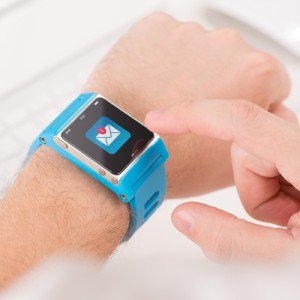 When wearable devices like smartwatches and other smartphone accessories first hit the market, many users thought “What’s the point?” A number of individuals agreed that since they had everything they needed in the palm of their hand, why did they need another space-age type device on their wrist?

However, wearable technology like fitness trackers and Google Glass are certainly making headway in the marketplace. In fact, the Washington Post noted that more than a million smartwatches were sold last year, and this trend is poised to continue as seen by a 250 percent year-over-year increase in sales in the first quarter of 2014 alone. Technology expert Daniel Burrus also noted that an estimated 300 million wearable units will be shipped out to consumers all over the globe by 2018, but he believes that number may be even greaterby that point.

So what does this mean from a business standpoint? Burrus forecasted that the wearable trend could shift company leaders to focus on WYOD – wear-your-own-device – as opposed to the current BYOD standard.

Boosted productivity: Eliminating the “smartphone zombie”
But since a number of wearable devices are aimed toward the health and fitness sector, many are wondering just what benefits are in store for the corporate user armed with a smartwatch or Google Glass. The Washington Post outlined a very specific advantage that could encourage enterprises to take the WYOD practice by storm – the reduction of smartphone zombies in the workplace.

“The promise: Wearing your tech should cut the amount of time you spend as a smartphone zombie staring down at the palm of your hand,” wrote Washington Post contributor Hayley Tsukayama.

In other words, today’s enterprise employees that leverage wearable devices will no longer have their hands full when it comes to their mobile technology. Instead of searching for information or navigating an app on their smartphone, a worker can pull this content up via their Google Glass and have the ability to view mission-critical data while keeping themselves physically available to carry out other tasks.

This could translate to myriad benefits depending upon the type of staffer that has these tools on hand – or, out of hand, technically. For the sales agent, it means more eye contact and a better overall connection during meetings with clients. For the warehouse employee, it means being able to do more with their own two hands instead of juggling the company’s property along with their smartphone. Even the everyday office employee could now have a free hand to carry their coffeehouse favorites.

BYOD security risks reflected in WYOD
However, when it comes to WYOD, many of the security risks that impact BYOD plans remain in effect. For example, just as sharing business files over an unsecured platform on a smartphone could put the organization at risk, the same holds true for collaborating over wearable devices. For this reason, decision-makers must keep these BYOD security risks in mind and provide a secure file sharing program and other safeguarding measures for the wearable platform, just as they did for other mobile devices.